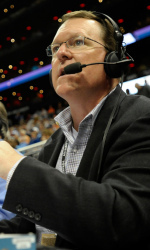 The Voice of The Yellow Jackets, Wes Durham has moved to a new position at Fox Sports 1 and sadly is moving on from Georgia Tech after calling a total of 760 GT basketball and football games over the past 18 years. I cannot imagine listening to a Tech football game on the radio without him and he will truly be missed by the Tech faithful. Yellow Jacket fans were lucky to have such a class-act and truly one of the great radio broadcasters of his time for so long.

It has been reported that Wes will continue calling all Atlanta Falcons games even with his new gig. Durham was the 2006 recipient of the Furman Bisher Award for Sports Media Excellence and an eight-time winner of Georgia Sportscaster of the Year Award. We will miss you Wes! Here are a few of my favorite Wes Durham Georgia Tech calls from over the years:


December 5, 2009
(#10) Georgia Tech 39, Clemson 34
(ACC Championship) Raymond James Stadium, Tampa, FL
The Yellow Jackets get a key stop to win rematch with the Tigers and the 2009 ACC Championship; book a ticket to Miami with a BCS Bowl Game Berth in the FedEx Orange Bowl.