Email ThisBlogThis!Share to TwitterShare to FacebookShare to Pinterest
After Georgia DB Sanders Commings was arrested last night on a domestic violence charge, I joked they should make a cheat code on NCAA Football 2012 for an 'ALL-TIME UGA Arrests Team'. After a little research, I found out that you indeed could actually create one, here's the roster: 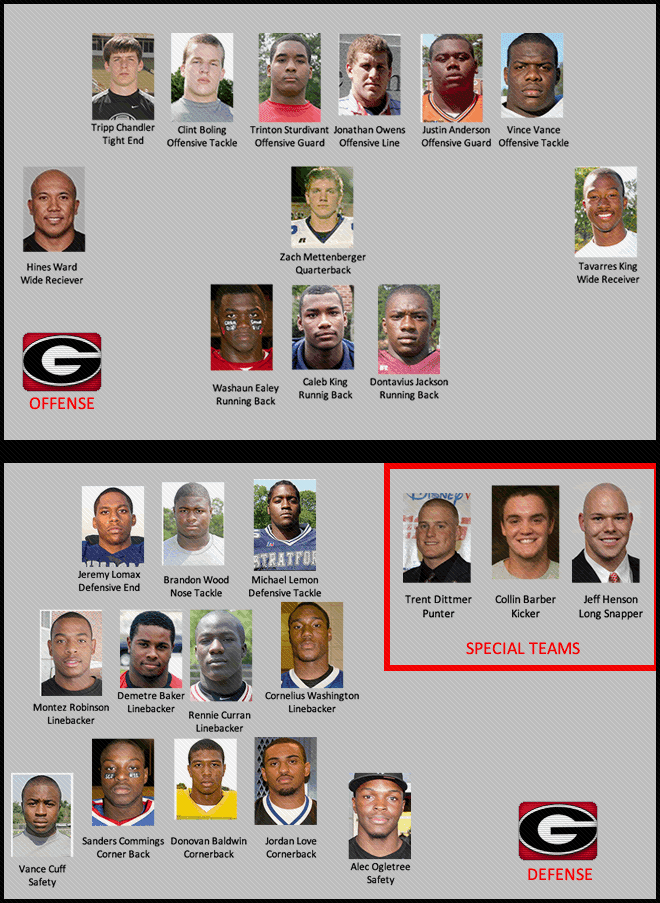 STARTING DEFENSE
DE Michael Lemon
arrested and charged with a felony in an alcohol-related battery incident that sent a University student to the hospital with a severe eye injury
DE Jeremy Lomax
arrested for speeding, possession of a concealed weapon
DT Johnathan Sullivan
The #6 overall selection in the 2003 NFL Draft, Sullivan was charged with running two red lights and possession of marijuanna in 2006, he lasted just 4 seasons in the league

NT Brandon Wood
stopped for driving without headlights, and then was arrested for DUI
LB Montez Robinson
Simple battery, criminal damage/second degree, Underage possession of alcohol
LB Demetre Baker
DUI, underage possession of alcohol and improper driving
LB Rennie Curran
arrested on charges of simple battery
LB Cornelius Washington
arrested on a charge of DUI after being stopped by police in Commerce for driving 92 mph in a 55-mph zone
CB Sanders Commings
was arrested this past Friday night and charged with domestic violence and simple battery
CB Donavon Baldwin
arrested on charges of speeding and driving on a suspended license
S Vance Cuff
Driving without a valid license
S Alec Ogletree
The best of the best, this is true: arrested after police issued a warrant for for the theft of a SCOOTER HELMET
S Bacarri Rambo
Rambo tested positive after eating some brownies that he did not realize contained marijuana during a spring break trip with friends to Panama City, Fla., oops! I'm sure he was totally unaware of this! poor guy
Honorable Mention: CB Jordan Love
Obstruction of a law enforcement officer, Love was arrested at a scene for obstruction because he would not provide his full name to the officer

TEAM STAFF
AD Damon Evans
University of Georgia athletics director Damon Evans has been relieved of his duties after he was charged with DUI on Wednesday night in Atlanta, a person familiar with the situation told ESPN.com on Sunday. The married Evans was intoxicated in the vehicle with a woman other than his wife, but A Georgia coach told ESPN.com on Sunday that during a meeting with several Bulldogs coaches on Thursday, Evans said his relationship with the 28-year-old passenger in his car was "nothing more than friends." 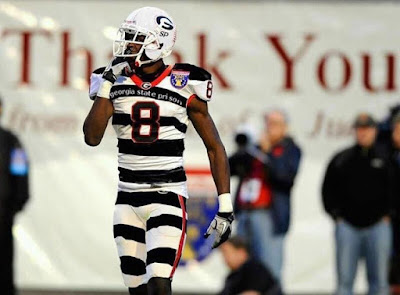 2/3/12: Three University of Georgia football players were kicked off the team for stealing from a teammate, according to a source. Nick Marshall, Chris Sanders and Sanford Seay were dismissed after allegedly taking around $500 in money and valuables.

3/9/12: A BIG addition to the All-UGA Arrests Squad; Orson Charles was arrested for drunken driving early Friday morning, March 9th. Charles was charged with driving under the influence and impeding traffic flow by Athens-Clarke County Police after being stopped at approximately 3:00 AM, as he was stopped in the roadway at South Milledge Ave and Morton Ave when a police officer pulled up behind him to check if his vehicle was disabled, he then began to drive away and the officer followed him a short distance before pulling over the vehicle. Charles registered a .095 blood alcohol level and was arrested for DUI.

4/29/12: Caleb King, who played for the University of Georgia but was ruled academically ineligible to play for the team last fall, has been arrested on assault charges, King is accused of punching the victim repeatedly and throwing him headfirst to the ground outside a birthday party. The man was hospitalized with skull and facial fractures, cuts that required more than 50 stitches and may have a serious head injury.

6/29/12: Georgia tailback Isaiah Crowell has been dismissed from the team following his arrest early Friday morning on three felony weapons charges. According to Athens police, Crowell was arrested at a “vehicle check-point” on Green Street at 2:20 a.m. Friday. The officer reported smelling the odor of marijuana in Crowell’s silver 2005 Mercury Grand Marquis. Crowell gave consent to search the vehicle, No marijuana was discovered but a black 9-mm Luger handgun with an altered serial number was found under the driver’s seat. Crowell, a sophomore from Columbus, was immediately arrested and taken to jail at 3:37 a.m. on charges of possessing a concealed weapon, having a weapon in a school zone and having an altered ID mark on that weapon. His bond, originally set at $7,500, was raised to $9,500 late Friday morning. Crowell, who came to UGA in 2011 as the No. 1-rated running back prospect in America, was slated to start for the Bulldogs at tailback this season. During his freshman campaign he was also suspended by the team twice, including the home opener vs. New Mexico State, reportedly for failing a drug test.

8/2/12: Chase Vasser, UGA junior outside linebacker from Gainesville, was arrested for driving under the influence back in May in Atlanta, Georgia officials confirmed on Thursday. The 21-year-old projected starter has been suspended for the first two games of the season as per UGA’s student-athlete conduct code.
Newer Post Older Post Home