Email ThisBlogThis!Share to TwitterShare to FacebookShare to Pinterest
I used to be a pretty hardcore autograph collector, I don't really do it any longer because it can be very tedious and time consuming. I've had a lot of success, I was featured in the AJC for Braves autograph collecting in 2007 and a lot of people ask me- "What's the best way to get Braves to sign?" The secret is to separate yourself from the masses, a player is 100x more likely to sign for 1-2 people instead of 100 (this is pretty obvious, makes a lot of sense).

Since I don't do it much anymore, it's time I revealed a little secret. (NOT SAYING) this has worked for me 100s of times, I have (not) gotten hundreds of players to sign over the years and although this may or may not be to your taste (or really legal ha) it is pretty much a full-proof way to get yourself in the best position possible. Before I go into the details here are a few basics of autograph seeking 101 at Turner Field.

GET THERE EARLY: The gates open 2.5 hours before first pitch; the side gates (entrance to box seats-they block off people from going anywhere except centerfield for some reason) open 2 hours before first pitch. If you get there that early I would highly recommend getting a $1 ticket, they sell them at the far right ticket window at Turner Field (near right field) beginning 2.5 hours before game-time. They only have 186 tickets available, you may only purchase 1 ticket (for yourself, can't say your buddy is in the parking lot and you're getting him one) and they are available on a first come-first serve basis (can't be reserved/purchased elsewhere). 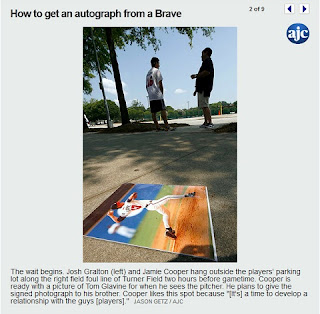 CHOOSE GAME WISELY: Your autograph odds dramatically increase during weekday games, during non-premium games & vs. the teams that no one else wants to go to (less competition). You may get 10 players to sign when the Braves are playing the Padres on a Tuesday school-night in May, but you may only get 0-1 players to sign on a Saturday night ESPN game vs. the Phillies.

BE VOCAL: Call a player out you want to sign, don't be soft-toned when you speak to them and don't expect a player to come up or sign something for you if you don't ask them to. Don't be shy, a player will never come over if you don't appear all that eager to have their autograph.

DO YOUR RESEARCH: Know their FIRST name (and last name) and politely use it when you ask them to sign... You can even use the GameDay booklet they give you when you walk in the gates if your not exactly sure, but DO know this. A player is much more likely to sign if they think you know about them (it's an ego booster-especially for the younger players), think about how you would feel if someone only wanted you to sign because you were a Brave- or just wanted anyone to sign anything, you would kind of feel stupid. A player is never going to sign for some saying their name incorrectly (ex. Eric Hinske- Hey "Hin-sk" sign for me!) or by just a jersey number (Hey #4 sign my ball!) that's not only embarrassing for both of you, but totally disrespectful. If you call a rookie/fairly random player by their first name (and it's not a upcoming superstar- like Heyward, Francoeur back in the day) your almost a lock to get them to sign- they appreciate someone that really knows who they are.

HAVE REASONABLE EXPECTATIONS: Don't hold out for the huge stars, especially if you only try to obtain their signature one time. Chipper Jones has signed MILLIONS of autographs, he gets asked to sign something everyday- no matter if he's getting coffee, at the ballpark, at the mall, etc. They get tired of it, especially after a long career, and frankly you would too. Don't give me this "it's his JOB to sign for the KIDS," sorry no its not; his job is to play baseball, these players commit to countless off-season public appearances, charity events and other community work. You can expect the guys that aren't asked as much to sign for you instead of the big names, that should be common sense. Finally, if you want to get a bunch of players to sign, keep coming back and trying again- a player may pass over you, he could have signed 20 balls outside, he could have had a bad day or maybe he is in a huge slump and wants to stay focused on the game- respect them saying no, they have a game to prepare for. You will undoubtedly see results over a longer period of time trying.

Ok here it is... THE BIG SECRET that (may/may not have) worked for me and got me best results:
When you enter Turner Field and try to get Braves autographs, the Ushers will funnel the general masses to the first base side by the tarp (no chance-1/50 games will a random player come over there to sign, just way to many people). Your best bet is to ask players right above the Braves dugout (where they enter after BP to go to the clubhouse), the catch is only people that have tickets in section 109 are allowed in that seating area, it DOES NOT matter if no one is there yet, if you are 3 hours early, etc. They DO NOT care and will tell you to go to section 119 (by the tarp). This is not exactly...let's just say... legal ha! but if you do it correctly, no one will care and no one will notice. 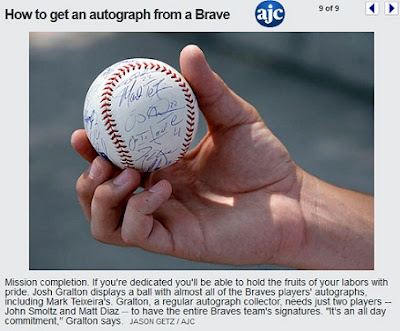 The day before the game, get a cheap Ticketmaster ticket and choose the "print your ticket at home" option. Get on your word editor on your computer and match the font size/style to that of the ticket (you may have to play around with it a while, it needs to be pretty close to the real font size and type). Print out a few different things section "109" & a higher price for the ticket (look it up, what the actual cost would be). Once you have it matched print that out- cut out the new section & price and cleanly TAPE it to your original ticket. Once you have it looking legitimate, go somewhere and make a PHOTOCOPY of the entire sheet, that way it won't look too sketchy. You should have a good enough copy to make it look good to an usher. Don't alter the Bar-Code obviously, better yet print another copy of your original ticket and use it to get into the main gate at the stadium. Only use the altered ticket when you are trying to show the usher who will grant you access down into the main box-Braves dugout area. Don't push your limits, once BP is over go to your real seat, you won't be at risk of getting in any trouble that way. The reason it works is because there will only be a handful of people that have tickets in that section that early/when gates open. Be careful! If you do it correctly you'll never get in any trouble and you will have the upper hand vs. anyone else in the stadium. Good luck and happy collecting!