Email ThisBlogThis!Share to TwitterShare to FacebookShare to Pinterest
You would be hard pressed to find a coach with more doubters and naysayers than Georgia Tech's Paul Johnson. You don't have to look far on the local message boards before you'll find a few Tech fans & alumni already calling for a coaching change (like the GT program is Notre Dame or something). Fan talk aside, the truth is CPJ has put together an impressive resume in his time in Atlanta; averaging nearly 9 wins/yr, racking up some impressive hardware and arguably exceeding all expectations in his first 4 seasons. The cliche statement you'll hear the most is "That offense won't work," (see AJC's Terrance Moore) but it undoubtedly HAS WORKED. Johnson's record is 34-18 (.651%) overall and 21-11 (.656%) in conference as Tech's HC. Here's a look at the 4 seasons under CPJ, green games are (+) wins and red games are (-) losses.

Coach Johnson By The Numbers: 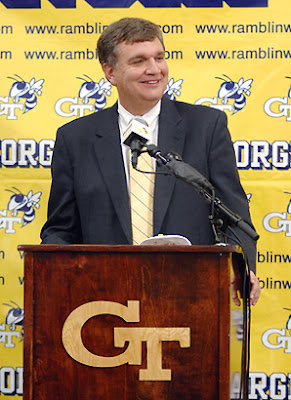 Since Tech hired Johnson, there has been 49 coaching hires in Div. 1 football, among those there's been 1 national championship (Auburn) and 5 conference championships (turned out by four different coaches). Paul Johnson is one of the four.

Johnson is the first coach in Georgia Tech history to win eight or more games in three of his first four seasons. (Chan Gailey won 8+ games only once in six years as Tech's HC)

CPJ is just the fourth coach in ACC history to defeat all 11 conference opponents; joining Bowden, Beamer, and O’Brien.

Johnson is the first coach in ACC history to be named Coach of the Year in each of his first two seasons. He was also named the 2008 National Coach of the year by CBS Sports.

Since 2008, the Jackets trail only VA Tech for most conference victories (21) in the ACC.


Coaches Interviewed For HC Position in 2007: