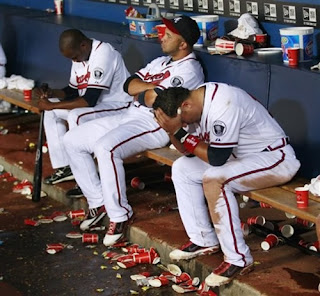 On September 5th, the Atlanta Braves held a 8.5 game lead in the NL wild card race and looked to coast into the playoffs. 24 days later, that lead has vanished and the season is over. This team will be the topic of conversation for a while, and you can add another page to the long list of Atlanta sports under-achievements, failures and disappointments.

Jason Heyward
Jason was projected as a top pick in fantasy this year, but a monumental sophomore slump and the new Braves curse of right field left a huge hole in the lineup. Heyward wrapped up the season with a .226 average, 14 homers and only 42 (yes- FORTY TWO) RBI. The Hank comparisons can wait one more year.

Training Staff
Another year, another series up key injuries and fatigue problems flare up with the Braves. The loss of Jurrjens and Hanson left the team having to call up players from Gwinnett premature. Most of these youngsters did fairly well, but they couldn't duplicate the success of the key duo lost. Another key injury and rush to get Moylan ready may also end his career- with a 6 month recovery period and surgery being projected. 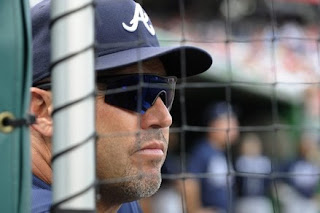 Freddi Gonzalez
Freddi has yet to show much emotion or disappointment in a post game interview after a loss. Freddi's yet to show much 'fire' as a manager; he has yet to place blame on anyone, call out his club or hold anyone accountable for the underachievement, including himself. Bobby Cox got away with this because of his record; Freddi needs to learn to become his own manager and realize he doesn't have the accolades or records of Cox. He also should criticized for the way he has managed his bullpen, over-working his young top pitchers and allowing them to run out of gas late in the season. Kimbrel (2), Venters (1) and O'Flaherty (5) were among the top 5 pitchers in MAJORS in appearances. This shouldn't have been the case considering the risk of injury and damage it could have caused to their careers. Another season like this in 2012 could spell the end of the road for Gonzalez in Atlanta.


The Boston Red Sox
The Sox duplicated collapse will get most of ESPN and the media's attention; that's good right?


Julio Teheran
20 year old Julio Teheran was named the INTL League Rookie of The Year, allowing one earned run or less in 15 of his 23 starts. Teheran also had a sparkling record of 8-0 with a 1.34 ERA on the road this season for Gwinnett.

Craig Kimbrel
Kimbrel tied for the NL lead in saves and set the all-time rookie saves record. He finished the season with 78 innings pitched, 126 Ks, 46 saves and 2nd in the majors in appearances. 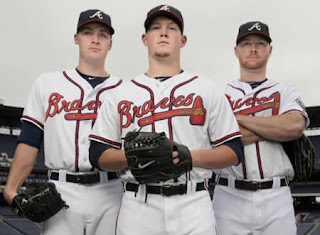 The 7th-8th inning guys were money in the bank, greatly exceeding expectations. O'Flaherty quietly finished the season with an ERA under 1.00 and allowed only 8 runs in 73 innings pitched. Venters finished the year with a 1.86 ERA while leading the major leagues in appearances.

Dan Uggla
After a horrible first half, Uggla rebounded to hit .283/21 HR/76 RBI after the all-star break. Uggla's hitting streak of 33 games was also the longest in the majors since 2006.

Freddie Freeman
One of the Braves two ROY candidates, Freeman had a remarkable season in 2011; posting a team leading .283 average and 76 RBI. Freddie had a stellar year with the glove, as well several clutch game winning hits. Freeman was the first Brave to eclipse the 20 HR mark in his rookie year since Chipper Jones in 1995.

Acquisition of Michael Bourn
The Bourn Identity was a great pickup for the Braves, a team desperately needing some consistency from the leadoff spot. Bourn will be back with the team in 2012 after finishing the season with a .292 batting average and 61 stolen bases.