Let's face it, Coach Paul Johnson is the perfect fit for GT. Like it or not, his old school style is a great match for a team that struggles to recruit with any coach due to the schools academic requirements and in-state competition. He keeps Tech in every game and no other coach has won more in his first 4 years at the Institute on North Ave. He's been the ACC Coach of The Year twice in his four seasons with the Jackets and only Frank Beamer has a better win percentage among coaches with 4+ years of HC experience in the ACC. Graduation rates are up, (uniforms are looking better) testing rates are up, National TV coverage is up and while it may not be "the sexy program" it's certainly come along way since the Chan Gailey days. 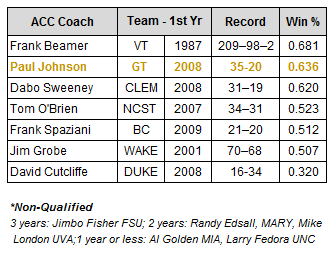 Why do some Tech fans insist on running him out already? Ask yourself... Can Georgia Tech find a better Coach? Who REALLY wants to come to Tech anyways? lets be honest... will we find a better X's and O's coach? that doesn't exist. Is Saban leaving Bama for us? what about realistic candidates? What makes the Tech job appealing? It drives me crazy seeing some fans call for a change with no realistic views on a replacement. How did that whole Paul Hewitt thing work out? Too early to tell, but I don't think the rush to hire another Brian Gregory is imminent or really ideal at this point. Let us think logically as Techies before we light the pitchforks.

This was the guy we were signing to extensions and begging to stay two years ago, why has it changed so abruptly? This biggest knocks? Can't recruit. You get what you get with our system, the blue chip pieces won't land here... and we deal with it. Its something they aren't looking for, one man won't get 25 touches at running back, a QB won't throw the ball 10x a game? so why are expecting something we aren't actively trying to find? that we CAN'T expect, its not our plan and it's not our system, so why are should we expect a cookie cutter recruiting class if we don't run a cookie cutter offense? We can't. The other complaint? Can't beat Georgia, can't beat Va Tech, can't win a bowl game. OK, what's your point? When should we beat Georgia? Maybe once out of five? 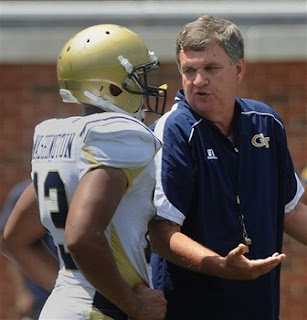 In 2009, Tech was a winning drive away from taking two straight vs. the Dawgs, Bebe dropped a pass in his hands for the go-ahead score with seconds to play. In 2010, CPJ clearly, undisputed out-coached Mark Richt- he took a QB into Athens with 3 games of total experience, he was down 14 in the forth quarter, he rallied the team back, but the kicker MISSED AN EXTRA-POINT to tie the game at the end of regulation. Then he LET Georgia SCORE when they could have taken a knee for the easy win to get the ball back, making Richt look foolish despite losing to him again. In 2011 they just flat out lost, but my point is- CPJ can't catch passes and can't kick extra points, he did his job and did it well... it's not fair as a fan base to hold him liable for the unpredictable.

When have we been favored against Va Tech or UGA? who is going to change that? It's crazy to me that some fans think Tech is LSU, USC, Texas or Alabama. WE ARE NOT A ELITE TOP-TIER PROGRAM, reality check folks... I hate to say that. We are, at best, a top 20 team that competes at a high level every week. Once every 20 years will we make a NC run, I don't think any head coach can jump in and change that immediately, the scary truth is that with a poor coaching change away from being a Maryland, Wake Forest or Mississippi State. It's time we start appreciating what we have. No, we may not win every game, but when have we ever been a pushover under CPJ? NEVER... he gives his team a chance to win week in and week out, and in my humble opinion, that's all we can really ask for. For fun, lets take a look at (in my opinion) Coach Johnson's 10 best wins and losses:

#10
2010 @ Clemson, LOST BY 14
We don't often lose to Clemson, but when we do... we do. Nesbitt's last healthy game should have been better from such a promising, returning group.

#5
2009 Georgia, LOST BY 6
The tide starts to shift for only a split second, but Bebe's dropped pass in his hands folds a go ahead TD drive with under a minute to play, UGA equalizes series vs. CPJ, continues to own the series.

#6
2009 @ Florida State, WIN BY 5
Tech wins back to back seasons vs. Bowden is the shootout at Doak Campell.

#2
2008 @ #11 Georgia, WIN BY 3
Johnson's first trip to Athens is successful, knocks off Moreno & Stafford in final home game at Sanford.