Sports: For Better or Worse

College Football is a beautiful game, a game of passion, emotion, allegiance and identity. There are 2 types of fans: the casual fan and the totally engrossed, overly-committed, let-the-outcome-affect-your-life type of fan. The first asks the second, "How can you be so upset about a silly game in which you cannot control?" Is there a good answer for it? not really, it just does... This irrational behavior is a bit over-the-top, but nevertheless for those that can't explain explain it, it does exist.

The reason I love baseball so much more, or at least claim to, is because the results of each individual game don't hold as much value as those in college football. The season is so long, the numbers are true and don't lie over time and at the end of the year- you pretty much get what you earn. College Football is different. One loss can effect your season, and the next season, and recruiting in state, and your week by thinking about it all, etc. etc. Many losses can be overly dissected with "Oh if this play were different we would have won" or "If we didn't get/got that call we had it." In baseball its a little easier to shake it off, most teams will play the next day- in football, you may not play for 2 weeks or be able to redeem yourself for sometimes a year. The highs certainly go into affect too- you can have a program changing win that sets your team up for a great season, but the lows can be agonizing, gut-checking and all the what if scenarios can play with your emotions. Week in and week out, the beautiful game is played- the stakes are high; identification and allegiance to a team are important. Most of us can say we feel a part of it, it's stupid and irrational, but isn't it true? For whatever reason, it becomes a small piece of who we are, many people will say, "I can't relate at all to what you're talking about," but just as many will think, "I know exactly what you mean." 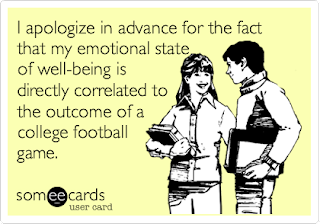 Sports can have zero bearings on your life at all, they can be directly a part of your life- say in your career or as a coach. They can also be an outlet away from reality, to take a minute, or get away from "real life". It can be a chance to step away from reality and invest in something in which we have completely no control over. We deal with loss in many ways: anger, rage, jealously, sadness, blame, call for coaching changes, seeing a silver lining, with negativity and expectations for the worst. We deal with wins in many ways: pride, boastfulness, excitement, indifference, anticipation and the list goes on. For better or for worse, sports affect peoples lives; they affect society, careers, money & marketing, moods and morale. After New Orleans was devastated by Hurricane Katrina- The Saints single-handedly rebuild the cities disposition, outlook and spirit in a positive way. Steve Bartman, one name- and most people won't need to know any more details, you already know because it's ingrained in your mind, you already know because it happened, and whether you want to know it or not- it's a small part of your life. Do you think about it at all? probably not. Does it trigger a memory, an emotion or recall of what happened? probability increases. What do you think that name means to the City of Chicago, baseball & American history and the Cubs? one of the oldest franchises in Major League Baseball? Most have moved on, some haven't... but few have forgotten.

How do sports affect your life? how do you deal with the results? do they affect you at all? Sometimes it would be easier for me to stop the emotional investment all-together. If we lose it can feel terrible, if we win... people will forget, down-grade the meaning and the cycle will repeat again next year. What is the point anyway? Why do we care? Does it really "mean anything?" How do we benefit at all from a team that doesn't know or care about us individually anyway?

One of my all-time favorite movies is Fever Pitch, the 2005 story of The Boston Red Sox starring Jimmy Fallon and Drew Barrymore. The original plot had assumed they would lose in the playoffs, however they won 8 straight games. No team in the history of baseball had come back to win from a 3–0 series deficit in the playoffs, but the Red Sox finally did to win the 2004 American League Championship and subsequent World Series, their first since 1918. The ending of the movie had to be rewritten and additional scenes were shot in St. Louis, Missouri to rewrite the original script.

The lines from the film below summarize a great explanation and outlook of what being a fan is like:


Troy: You love the Red Sox, but have they ever loved you back?
Ben: Who do you think you are, Dr. Phil? Go on, get outta here!
Troy: Why do we inflict this on ourselves?
Ben: Why? I'll tell you why, 'cause the Red Sox never let you down.
Troy: Huh?
Ben: That's right. I mean - why? Because they haven't won a World Series in a century or so? So what? They're here. Every April, they're here. At 1:05 or at 7:05, there is a game. And if it gets rained out, guess what? They make it up to you. Does anyone else in your life do that? The Red Sox don't get divorced. This is a real family. This is the family that's here for you. I like being part of something that's bigger than me, than I. It's good for your soul to invest in something you can't control.
Lindsey: You're a romantic. You have a lyrical soul. You can love under the best and worst conditions.


Alcoholics deny reality or wish they could stop drinking; drug addicts often times will be the first ones to tell you "don't ever do drugs." How do you explain it? What has your team really ever done for you? Either way, one thing is for sure- Another Saturday will come, and whether I want to or not...I'll keep watching.
Newer Post Older Post Home