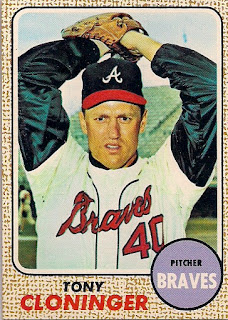 ‣‣ Braves Pitcher Tony Cloninger is one of six players tied for the Major League record for most career Grand-Slams by a pitcher with 2. He is the only player to hit both in the same season; surprisingly he hit them BOTH in the SAME GAME. On Sunday, July 3, 1966 at Candlestick Park, Cloninger went 3-5 with 2 grand slams- one in the first inning & one in the fourth. He also pitched a complete game and Atlanta won 17-3. Cloninger also holds the Braves franchise record for most RBI in a game thanks to that day.

‣‣ Chipper Jones is the only player to hit 6+ Home Runs vs. Randy Johnson, Steve Trachsel (7) is the only pitcher that has given up more career home runs to Jones.

‣‣ The Braves franchise is the only professional baseball club to win a World Series in 3 different cities- Boston, Milwaukee & Atlanta. They also hold an American Major League Sports record for most consecutive division championships (14 years from 1991-2005).

‣‣ Brooks Conrad captured two All-Time Major League Records in 2010: Most Grand-Slams in a Season by a Pinch-Hitter (2) and Most Errors in a Divisional Series Playoff Game (3). 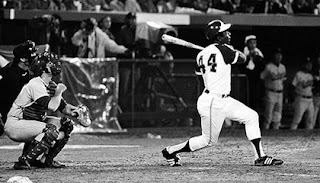 ‣‣ #44 Hank Aaron broke Babe Ruth's career HR record on 4/8/74. Aaron did it on the fourth pitch of the fourth inning in the fourth game of the fourth month in a year divisible by 4. The pitcher that gave up the homer also wore #44 (Al Downing). Hank won the HR title 4 times; he also hit 44 homers in a season 4 times.  Only four HRs were ever hit over the CF wall in the Polo Grounds; Aaron, you guessed it- was one of them.

‣‣ Two players were involved in both the opening and closing games at Fulton County Stadium in Atlanta. Tony Cloninger and Joe Torre were the Atlanta battery when the Braves and opened the 1966 season in Fulton County Stadium against the Pittsburgh Pirates on April 12 before 50,671. Cloninger pitched all nine innings but lost 3-2. Torre was 2-4 and accounted for both Braves runs with a two-run HR. The final game in Fulton County was Game 5 of the 1996 World Series. Torre was the manager of the Yankees with Cloninger was his bullpen coach.


‣‣ The Braves are the only team in MLB history to have a player hit a homer in his first big league at-bat in consecutive seasons on opening day. Jordan Schafer & Jason Heyward did so exactly 1 year apart- Schafer on April, 5 2009 & Heyward on April 5, 2010.


‣‣ Tim Hudson compiled a record of 165-87 during the first 12 years of his Major League career; exactly the same record compiled by Sandy Koufax in his 12-year career. Koufax compiled 2396 K during that time, while Hudson only had 1541 K.


‣‣ Only one Braves player has been ejected from a game & suspended for another- during a game in which they never played; the player wasn't even on the active roster. Chipper Jones was dismissed after arguing balls and strikes with umpire Doug Eddings on September 5, 2010. He had to serve a 1 game suspension once he returned to the active list. 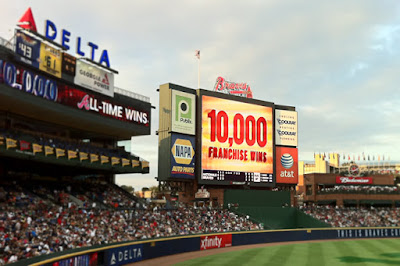 ‣‣ The Atlanta Braves are only one of three franchises to win over 10,000 wins in its history (Cubs/Giants). Atlanta & Philadelphia are the only teams in MLB history to also LOSE 10,000 games. The Braves are the only team ever to be 500 games above AND below 500.


‣‣ The Braves haven't been considered great in recent history, but over the past three years- only one team has spent less money and won more games than Atlanta (Tampa Bay Rays).


‣‣ In 1982 the Braves won the Western Division on the last day of the season. The media asked team owner Ted Turner what made this club different from the losing teams of the seventies. Turner replied, "We have no crazies, flakes, or drug addicts.