The Case For Andruw

After reading today that John Smoltz will have his #29 retired by the Braves on June 8 of this season, it got me thinking about other Braves in recent history that deserve that honor. Andruw Jones was the one name that came to mind- and after asking several others about their opinions, the overall consensus was "No, Atlanta SHOULD NOT retire his number" for a variety of reasons. I did a little research and disagree, although I see the argument from both sides, I found a few stats that show Andruw not only deserves to have his number retired- but that he deserves to be in Cooperstown someday.

The biggest things that factor against Andruw are time (people forget), he moved to another team (he was not tendered a contract at all, no offer by the Braves once his deal expired-forced to sign elsewhere), his career now is bad (short prime of career). Those all, maybe even rightfully so, play against him a great deal- but the truth is Andruw had one of the best primes of a career as anyone in Braves history. 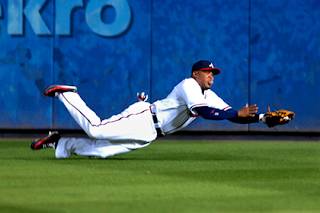 From 1998-2007 (10 years) he won 10 consecutive Gold Glove Awards. He undoubtedly is one of the best defensive outfielders of all-time. According to baseball reference, Jones defensive WAR (wins above replacement, the average amount of wins that would be lost if the player was replaced by defensive player that is at the league average) is ranked 2nd ALL-TIME by ANY player at ANY position with a rating of 23.9 behind only Brooks Robinson.

Chipper is considered to be a unanimous first-ballot HOF'er, but people forget that Andruw was once just as much the "Face of The Franchise" as #10 during the 00s. Andruw has only 35 HR less than Chipper in about 1300 fewer AB and only 250 fewer RBI. He was also a 5x All-Star, Silver Slugger Award winner, 2005 NL HR Champ & 2005 ML POY.

Jones was also incredibly durable during his tenure with the Braves; in his first 4 full ML seasons- he missed a TOTAL of 5 games, he never missed more that 8 games in the same time (10 year) span. Some argue his offense was inconsistent or not HOF worthy, but again from 98-07- he AVERAGED 158 games per yr (insane for a CF), 30 doubles, 34 HR and 103 RBI. He ranks #45 All-Time in MLB history in career HR, and again keep in mind he won a Gold Glove during EVERY season he put up those offensive numbers. The only center fielders in the HOF with more homers than Jones are Mickey Mantle & Willie Mays.

Think about who's been the only Brave that most would consider to have jersey number POSSIBLY retired (other than Chipper) someday in recent Braves history? Undoubtedly that would be Brian McCann. B-Mac has played 6 full ML seasons and was an All-Star each of those 6 years, (ok, I realize he's a catcher) he has NEVER driven in 100 RBI- only got to 90 in 3 of 6 years and has never hit 25 HR. Andruw Jones AVERAGED 30 HR/100 RBI for 10 CONSECUTIVE seasons. The last Brave to drive in 100 RBI? who was that? Jeff Francoeur...in 2007...5 years ago.


Hall of Fame voters have elected several elite defensive players before, Brooks Robinson and Ozzie Smith are guys that come to mind who were also first-ballot selections; Andruw was more valuable offensively than either of the two at the peak of his career. Unfortunately the things that stick with most fans are his “image” toward the declining portion of his career and the period/market in which he played in (lack of WS title). If Ozzie Smith is worthy Andruw should be too. If Jones was in New York winning WS titles during the prime of his career, I believe his story would written a little differently and his career would be seen in a different light. The truth is Atlanta has no plans to retire AJ's #25, they have allowed others to wear it already- even the season right after he left. To me that's a shame, image is everything in Atlanta... that's why they marketed Francoeur so hard and you still see so many of that bums jerseys around the Ted. What have you done for me lately? In my opinion, Andruw won't ever be replaced in center field, he made so many plays look too easy and he deserves more respect than he ever got credit for.
Newer Post Older Post Home