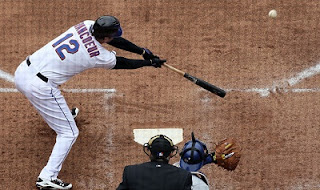 I have harped on this in the past, but Jeff Francoeur has to arguably be the worst everyday player in Major League Baseball. The Kansas City Royals front office makes some absolutely baffling decisions, particularly dealing with former Braves. Making risky moves is one thing, they traded super-prospect OF Wil Myers, rated #4 MLB prospect by Baseball America (who's drawn comparisons to Matt Holliday/Pat Burrell) during the offseason for 31 year old pitcher James Shields, who went 87-73, averaged ERA around 4 for the Rays over the past 3 seasons. Their is no argument Shields is a quality pitcher and borderline 1-2 rotation guy, but his numbers in 2012 declined in almost every category than 2011 despite starting the same amount of games; ERA was 3/4 of a run higher, 8 fewer CG, less IP, allowed more hits/ER, and opponents batted 22 points higher. Maybe not much of a concern, but the reaction around the league was mostly negative from Royals POV.

The best way to get to Kansas City as a Brave is to come here riding the hype train, fail, then get traded.
— Scott(@BravesGasm) July 2, 2012


Signing players and constructing the foundation of your organization, a lower-market club with a very limited payroll with no rationale or reason is another. Jeff Francoeur is penciled in AGAIN as the Royals everyday right fielder for the team despite having numbers that would make most GMs question his upside to wasting a AAA roster spot. Once Frenchy bolted Atlanta his attitude was "I just want to play everyday", defensive and arrogant like he was owed something or cheated; he tried that with the Mets and they saw the same thing the Braves did, so naturally his next move was to sign with the only (the worst) team in the league that would make him an everyday player. Kansas City paid him royally; Francoeur will make 6.75 mil in 2013 (5th highest paid player on the club/3rd highest paid position player) and that idea itself is almost as bad as the pun at the beginning of this sentence (not quite)

The guy had mind-numbing stats this past season; a .287 OBP, 34 BB in 603 PA, 16 HR, 1 sac fly during ALL of the 2012 season and the Royals will continue to employ him anyway. Of the 21 qualified RF in the league last season, he ranks close to the bottom in nearly every statistical category and has a NEGATIVE WAR, which theoretically means having him hurts the team. Jeff has always been a class act, one of the most fan-friendly players in baseball (heck he buys fans pizza for crying out loud), you can't help but want to root for him, he has a lot of fun... and maybe, just maybe the Royals really just want to have fun too; maybe like Francoeur, they know they aren't legitimate, so it's a good match and situation they both can relate to. 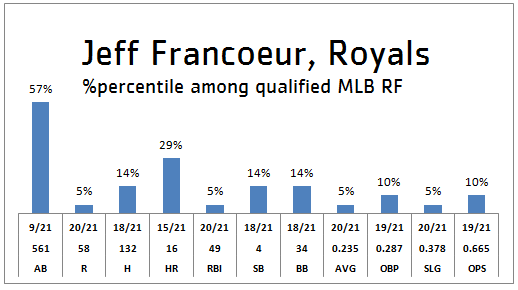