So how does this look Atlanta? Apparently the Braves aren't ready to bow-out to the Washington Nationals as the best team in the division, today's move according to some MLB exec's make them the best team in baseball. One thing is for sure, the Braves organization and its fans surely have something to be excited about for the upcoming season, a sense of hope...again, for a city that certainly needs it. Three 5-tool outfielders, a dynamic, young & extremely athletic lineup, great starting pitching and arguably the best bullpen in the majors. Will this translate to wins and not another first-round playoff knockout? time will tell, but 2013 looks bright for the Braves heading into spring training.

One Thing We Learned... Frank Wren is a go-getter, he has continued to be aggressive on the FA market and has pulled the trigger on several big deals in key situations. I can appreciate the moves he makes in an attempt to win NOW, not make deals that fill seats or are made in attempt to build a pretender-contender (see the Atlanta Hawks).

What The Best in The Business are Saying: 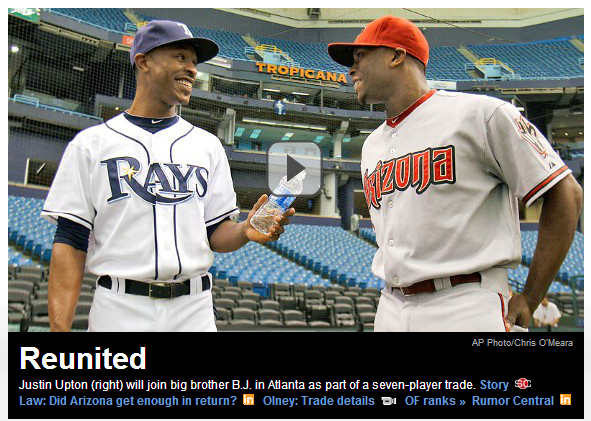 "The team that got (Upton) might be the best fit after all; the Braves suddenly have one of the most dynamic outfields in the NL all under control for the next 3 years." - Ken Rosenthal

"By adding Justin Upton, the Braves got younger, added much-needed power, upgraded their outfield defense and set themselves up to have one of the most talented young outfields in baseball in place for at least the next three years. (The Braves) won this trade, We surveyed seven big-league executives and scouts Thursday; all but one of them would have made this deal without blinking. The pairing of Justin and B.J. Upton in the same Braves outfield will be a fascinating thing to watch in 2013." - Jayson Stark

"The Braves didn't specifically need Justin Upton to be contenders again in 2013, but having him certainly helps. Because they got him for about 50 cents on the dollar, they should be over the moon about the deal they wrapped up Thursday. Arizona's return boils down to this: one year of Martin Prado, six years of a fifth starter in Randall Delgado, two fringy prospects and one non-prospect. If that sounds like a good deal to you, I have some beachfront property in Phoenix to sell you." - Keith Law

"Every day must be marvelous when brothers are teammates. The Upton brothers will get to experience that in Atlanta." - Tim Kurkjian

"As of today, The Nats & Braves may be the two best teams in baseball." - Jon Heyman

"Love, love, love this for Atlanta, Any time you can trade for a player like that, an All-Star-caliber player who's that young [25], it has to improve your team." - NL Exec

"It's a scout's dream, It's three five-tool players; that's what you've got in one outfield." - NL Exec

"If somebody had said three years ago that you could have those three guys in the same outfield, people would have been going nuts. Right?" - NL Scout 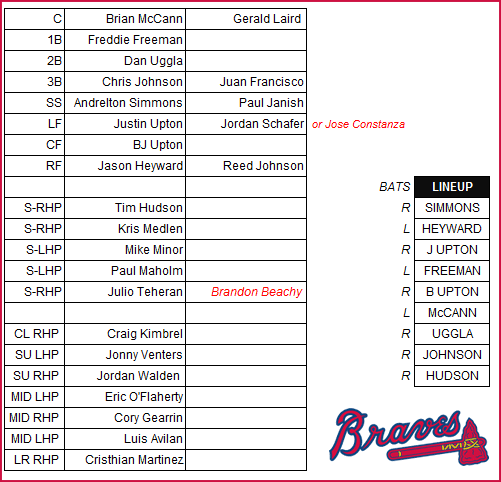