How Good IS Craig Kimbrel?

Email ThisBlogThis!Share to TwitterShare to FacebookShare to Pinterest
Braves fans are notorious for short term memory and a real 'what have you done for me lately?' attitude towards most players on the team. Craig Kimbrel faded a bit down the stretch, mostly from being overworked due to necessity, but in reality still put together a dream season for most closers; notching a rookie-record 46 saves, during his first full major league season. 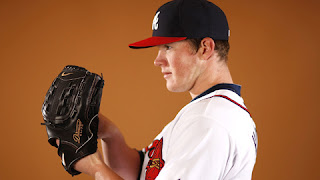 Craig was rewarded on Monday when the Baseball Writers' Association of America voted him the 2011 National League Rookie of the Year. Craig received all 32 first place votes and was the first unanimous NL ROY Award winner since Albert Pujols in 2001.

Kimbrel was flat out FILTHY during the middle of the year; in 38 games from 6/12-9/8, he pitched 37.2 scoreless innings, holding opponents to a .112 batting average while striking out 67.

Mariano Rivera is regarded by most to be the best closer of all-time. This is a stat line comparison of Rivera to Kimbrel during their first full big league season:


The icing on the cake: Rivera was 26 years old, Kimbrel was only 23.
Newer Post Older Post Home