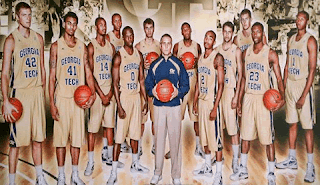 The new era of Georgia Tech Basketball is upon us. Tech elected to hire Brian Gregory, a choice that many of us loyal fans couldn't get too 'Rah-Rah' about. The fan base seemed excited to see Paul Hewitt finally be released of his duties, so although it wasn't the sexy pick for D-Rad, it still was someone other than Paul Hewitt. Time will tell about the reception and backing Gregory will receive after the first few games. Tech will be able to fly under the radar this year away from North Avenue, as a fantastic new complex, McCamish Pavilion, will open up its doors for the 2013 season.

The big losses for the Jackets were star PG Iman Shumpert (NBA), Brian Oliver (Seton Hall transfer), and Mo Miller (graduation). The starting lineup looks solid, but Tech's transition to a new system and lack of depth, (only 3 other rostered players not formerly walk-ons) will have everyone competing hard for minutes for the 2012 campaign. Tech's ACC media-day projection of finishing 10th in the conference should add motivation for the Jackets to earn some respect and make some noise for their new head coach.