Dawg-Gone: CMR Era Over In Athens

Email ThisBlogThis!Share to TwitterShare to FacebookShare to Pinterest
Can You Handle The Truth? The Good, Bad & The Ugly... Why UGA Made The Right Move 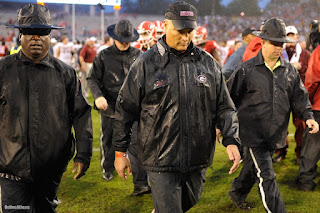 
First I believe that probably around 98% of CFB coaches are "leaders, build character and make a  positive impact on young peoples lives" all well before they ever become legitimate candidates to reach the pinnacle of their profession and become D1 NCAA FCB coaches. When schools like any in the SEC have almost limitless ways to find/attract the best guy for the job, interview dozens of quality candidates, fly private planes across country to visit you and invest millions of dollars in their belief (often times at expense of their own job being on line) that you will succeed. This does not come without hundreds of endorsements, good impressions and people committed to what you have done and will do.

CMR undoubtedly was a good guy... he drinks Coca-Cola, Drives a Ford, "loves his guys," the team and Georgia Saturday. He's a man's man, a straight shooter, loves his wife, says his prayers, probably has been on some sort of fishing trip with his pop and undoubtedly watches fireworks on the Fourth of July... If I am not mistaken I believe he even taught some player to read? joined his book club?... or at least they talked about it 100 times last year in the pre-game tid-bits... heart warming stuff.

All jokes aside, I'll take it one step further and say that he built UGA into a well-established, top 15 national program year in and year out. He has recruiting on auto-pilot and winning 9-10 games these days is a given. He's a cool guy, always looks very sharp on the sidelines, comes out oozing swagger & confidence.  On Twitter he a massive following, uses hashtags correctly, is engaging to the student-athlete,says somethings that even fire me up where I have to consider myself for a moment if I want to #CommitToTheG? I hope I am half that cool at 50...

He's also a family first type of guy, pulls a lot of kids out places they don't need to be in, believes in them and guides them on right path to making good choices. Mark is an outspoken Christian, a father figure, role model and just a damn good man... there's no arguing this, it's undeniable.

Despite all of the above being true- the flip-side of that coin is that he is also had scholarship athletes choose to use and get arrested for doing illegal drugs, DUI, assault & battery, forge school checks, sexually assault women in bars, carry unregistered illegal firearms while driving, commit multiple NCAA violations and heck...  One kid even stole a motor scooter helmet.

The natural "fire-back" reaction to that is...
"He can't control everything, kids make mistakes and bad decisions, everyone make choices, you cant make those for them, some you can't change, and some chose that path regardless of the direction that CMR is steering the ship."

That's all true too, but just as Richt gets the "good guy" label, other head coaches are doing the same type of thing. They may not be as Tim Tebow-esque like Mark or drop the buzz words southern Baptists love to hear- but that does not make them weaker men, further from God or lesser men of integrity... it just makes them different, some different in terms of doing all of the above AND meet / exceed expectations when it comes to wins and losses, which by the way matter quite a bit... not just in "the game", but to the University and ripple effect of all decisions the football program plays to UGA in the bigger picture. Huh? What?

During a 2007 60 Minutes interview... Alabama chancellor Dr. Robert Witt, who was the president of the university when Nick Saban was hired, was asked the question if Saban, (who makes over $5.5 million a year) is worth his paycheck... and his response was a bit of a jaw-dropper...


“Nick Saban’s the best financial investment this university has ever made" he said. “We have made an investment that’s been returned many fold.” Alabama’s athletic department’s revenue has increased by 112% since Saban was hired, and last year returned $4 million to the school in the form of academic scholarships, according to 60 Minutes. That's not just the best football hire... but the best investment in Alabama history.

Richt on the other hand, has guided the program to a plateau that is perceived as successful in the wins and losses dept... but much like you could critique Bobby Cox for only winning 1 WS Title in Atlanta with arguably best SP rotation in MLB history - are you consistently viewed as someone that produces a high winning percentage or someone that constantly does less with more? That topic was one thats recently become debate split down the middle.

Here's a few statistical facts for UGA under CMR:

The Richt thing has always intrigued me from being a GT fan... but more as me being a coach. It would be ridiculous to compare coaching youth soccer to D1 college football, that is not relevant or in this galaxy to make a comparison, but I still enjoy observing how different coaches handle adversity, accountability situations, scrutiny and criticism... How you bounce back from a loss, your message to your team and your players and how they react to how your preparation for competition.

2 things always bothered me about him... a lot... #1 he's not a Muschamp or fly off the seat of your pants kind of coach that overreacts about losses, and I'm not saying that's a bad thing... but one thing he repeatedly did, especially lately, was CONSTANTLY not address the facts or the truth. He would get his a** kicked... in some embarrassing fashion like Alabama game,.. and then come to the presser giving no real explanation or place blame on himself, the team or anybody. You would get a question like "what's wrong why did so and so work so poorly" or "why cant you win vs. the top teams"... something inside me was screaming for him to come out and answer the question like this...

"We did a bad job today, I'm embarrassed ...I apparently didn't have our team prepared, our fan base and Dawg Nation deserves more... We need to compete in the way we are capable, and it hurts to have lost the last couple "big games" for our progam, games that would propel us into drivers seat and pursuit of winning a national title. That's where we want to be...We have the talent to be there, UGA deserves that, and we will work our a** off as coaches and do whatever it takes to change that and be 100% committed to getting better result next chance we have."

if that's his response, I side with him, I root for him! its open and honest and people can relate to that... I think if he did handle certain things with some vulnerability he may still have the job today.

but instead got... "we didn't execute, need to execute better, we will get to work on it next week, give (so and so credit)"

a very generic, uninspiring and complacent answer year after year in games that the fan base was hurt... it seemed almost like Richt didn't hurt as much with them... or at least didn't show it. Maybe that's just his style, maybe he's lost his edge, has hardened a bit or every loss doesn't effect a coach in the same way it used to... but it not only looked like he was only bummed in these situations but truly in denial they even existed at all.


that leads me into bothersome item #2 - every season the team found a way to lose a game in an absolutely crazy or inexcusable fashion. I'm not confusing losing with this - there is nothing wrong or embarrassing about losing to Alabama, Florida, Auburn, Tennessee, Carolina, etc. etc. - but in the manner, way or under what circumstances. If you can see your team playing hard to the end... there is no shame in losing when clearly visible is where the players heads and hearts are at... because there is pride in the performance, that's a reflection of you as a coach more than anything... all you want to see is that mindset of "The Georgia Way - Finish The Drill"... and almost every year where the dogs took 1 game and didn't get off the bus or got on it at halftime. That falls on Coach Richt. 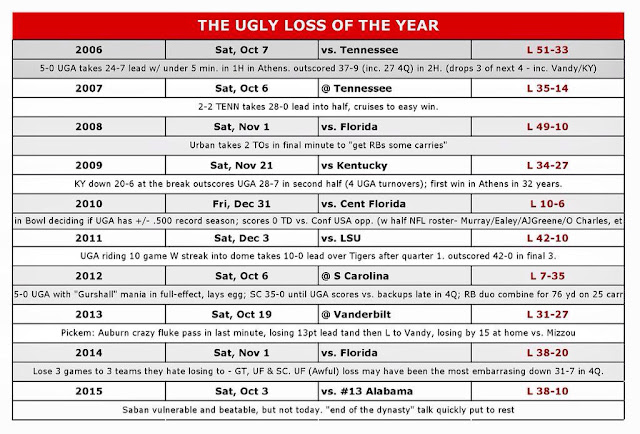 In conclusion I'll end with super deep philosophical quote that may not be relevant to college football at all, may be stretching here a bit... but a very long time ago, some guy named Michelangelo who was smart, painted good, sculpted like a boss and in the chance he was a Dawg fan would eventually whisper into Greg McGaritys ear this advice that tipped the scale towards making the decision that was made today...

saying this hurts, because at the end of the day... I have 2 favorite teams - Georgia Tech & whoever is playing UGA that week. But good is the enemy of great, and UGA has been good... they've been good for a while, but not great since 1980. UGA and their crummy little school in Athens is more than capable of being much more than good...CMR was not the guy to push them off the cliff... and turn that corner.,, and so many teams come close and never do.

Compare this UGA team to UF's team (disaster) in 2014 and what they achieved with a much less talented on roster, more question marks and how they have bounced back with a good new and inspiring head man... If UGA can find someone to do the same, they will come in with a lot of the 'great' pieces in place...


Help Wanted: Gardener - must have experience with growing love songs rebuilt from the heads of broken war drums that never sound louder than when pounded by mallets of our passion...to grow sons and brothers, husbands and fathers...between some sacred hedges, In our secret garden....ready willing and determined, despite the storm...