Email ThisBlogThis!Share to TwitterShare to FacebookShare to Pinterest
August 25, 2012. A huge and shocking trade is announced, the largest salary swap connected in trade in MLB history is completed, and the entire baseball world reacts one way or another as the Dodgers & Bo Sox complete 9-player deal ultimately shipping stars Carl Crawford, Adrian Gonzalez & Josh Beckett to LA. The rebuilding process was happening, but in New England where winning is expected, not everyone was exactly thrilled about trading 3 'once thought to be' foundation of the franchise type players, start to mortgage the now for the later; and wait to rebuild.... nobody wants to wait to win.


In a blockbuster trade with the Dodgers, the Red Sox have given up Adrian Gonzalez, Josh Beckett, Carl Crawford and in general.
— KorkedBats.com (@korkedbats) August 26, 2012

We all know the rest of the story... Boston didn't have to wait long. Fast-forward only 431 days later from the day and the RedSox were once again World Series Champions, going from AL next to last 69-93 to the best record in MLB 97-65 in only 1 season. Nobody possibly predicted it would happen so soon.

The Braves recent transactions have undoubtedly been abrupt, some may ever say hastily made; including parting with several players we as fans have grown to love, dealt swiftly and emotionless. It's bold, it's certainly risky, but for a club like Atlanta is the right move to make. Nothing, especially in baseball is guaranteed and nobody is arguing Atlanta/Boston's trades are close to the same magnitude, at least not yet; but it's ideally the exact same blueprint to take. The Braves way has to change, and has to change fast. It's failed. Ned Yost had more playoff wins this past postpeason than they entire Braves organization has the past 13 years (2002) combined.

I was a supporter of Frank Wren (and still am) because I admired how he made moves in order to put in the Braves in the best position he possibly could, almost every time, to win. In my last post I explained how different job was in comparison to JS and how unfair it was of him to throw him under the bus. The game has changed dramatically from the Braves dynasty days and the leverage FW was given on a year to year basis wasn't a fraction of what JS had. A few of the major obstacles included:
Therefore, many times FW had limited options on how to approach holes in the team, as an example in 2009 Hudson was recovering from surgery and the Braves had Vazquez, Jurrjens and Kawakami as the only mainstays in the rotation with nothing coming through the minors. It was also a very thin FA market with many teams overpaying for SP (ie. ridiculous Yankees Burnett 82/5 yr deal) that as a result shot market value way over the top. The Braves were extremely confident they would complete trade for Jake Peavy but never did, Wren initially stated in winter meetings club had 0 interest in signing DL. Wren was stuck with the choice to sign either Ben Sheets (coming off injury) or Derek Lowe (journeyman/fringey ace/more IP eater) or do nothing... walk and have no ace and step away from contention. Did most of Wrens deals work out well? No, so he is accountable (and it's part of the business) but he attacked every opportunity to make the team better every chance he could, everybody was excited that day, everybody! the city was pumped... who knew?

Hart is a good choice for Atlanta for no other reason than this: he has no attachment, investment or self inflicted relationships with the current players on the roster. I would imagine Frank Wren, just like we all do watching games- want Upton, Heyward and the like to be successful and are hoping they turn it around, live up to hype or become 'smart decisions' for the Braves primarily because all their acquisitions and development have been on his watch- their success is his success and the opposite is also true. We all wanted Jeff Francoeur to live up to the SI cover and Heyward to be the city's next guy you could mention in the same breath as Hank Aaron, but the problem is sometimes taking all the intangibles, story-lines and warm-fuzzy's out of the picture is the hardest part. Hart's job is to build a club, not write a movie script.

Speaking of movie script... I love Jason Heyward, I mean he's probably the coolest looking dude in the game, just has true vibe of a straight up bad-ass (but in a non-douchey way like Bryce Harper
. He is a total class act, I mean this is the guy that grows up down like 30 miles from the stadium and drives by every day on the way to practice dreaming over playing there someday. He's the guy that steps up to his first AB in the bigs and mashes a bomb on opening day, rounds the bases, hugs Chipper goes back to the dugout, repeat for the rest of his career.


I can't watch this without getting chills, even makes Chip Caray sound good, with is unreal in it's own right.


But the truth is, J-Hey has been a bit of an anomaly, you don't really know what you're going to get. Comparing his stats the past 3 years with 2 other NL Outfielders of roughly the same age (less touted), I was surprised by how close the numbers were.

Heyward's power numbers were a bit better, but more strikeouts/lower BA and very similar speed. Another example I came across and thought was the absolute perfect example of what I am trying to say/ 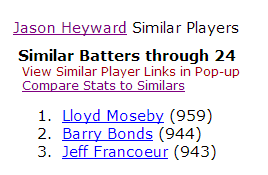 get across. He should be somewhere in between Bonds & Frenchy...  ;)

Heyward can without a shadow of a doubt go on and be an MVP caliber type of player for the Cardinals or another club, but he could also be a Jon Jay or Parra... a good player, but not guy you tie up 6+ years in and bank huge payroll investments on "potential", that's what got the club here in the first place, the lower the Braves chips get, the less they can gamble, and J-Hey is no gamble here. The ability to acquire outfielders/depth of OF around league at his production level is nowhere near as difficult to what it would usually be to acquire a top young SP like Shelby Miller, the Cardinals have the most SP talent in the game, so he was expendable- but make no mistake this kids a great acquisition.

The future is undetermined, but one thing is for sure... it certainly will be changing in Atlanta in 2015.