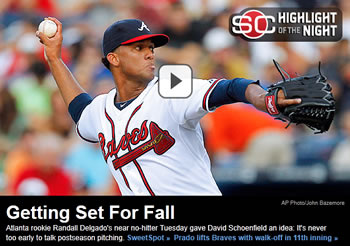 Here is my take on Freddi G's first year as Braves manager, and some thoughts on what he's done.

1. Playing The Hot Hand
Jose Constanza has 8 games with 2 or more hits and owns a robust .377 batting average since being inserted into the lineup; his speed adds another dimension that definitely benefits the offense. Major League teams have to adjust the way they play defense against the Bravos on a nightly basis and this new found run aggression has added an element that was non-existent with Bobby as manager.

2. Benching Jason Heyward
Jason Heyward has always been a bit over-rated since being called up and I still really like his game and his upside, but the Braves aren't the Royals anymore... we aren't playing for next year. This club has all the tools to make a run at the World Series NOW and Freddi knows this after managing his club for 100+ games. The organization can't wait for Jason to figure his game out now, in this situation, and Freddi has done a fine job knowing when to play and when to sit J-Hey. #6 played 'The Natural' day in and day out without worrying about the box score, and these Braves need hits- not feel good lineups.

3. Posting The Best Line-Up
Freddi has a lot of guts for making several moves that needed to be made, FINALLY moving McCann into the 3 spot; a spot that was pre-printed as C. Jones when Bobby wrote his lineup card. I wouldn't be surprised if Chipper had to pay a property tax on the 3 hole because that baby has been mortgaged for the past decade; rightfully so- up until the past 2 years. Gonzalez also made a nice move by hitting Constanza 9th for a few games; it was a smart and gutsy moved that gave the Braves a spark of success for a while. I admire the way he moves the lineup around, constantly trying to fit the pieces together. When Uggla has played bad he's hitting 7th; when he's played good he's hitting clean-up.

4. Making The Move
I like how Freddi doesn't keep hesitate to move guys in and out; he doesn't act like Cox in the fact that he's not seeing Kawakami make 10 starts before he realizes he's horrible. He has shown confidence in calling up some young rookies that have done well, not traded away the future for Pence (he does have some say in trades), and gotten rid of most of the Proctor-types that have plagued the team this year. Bobby always loved the vets, but I don't see Freddi keeping Keith Lockhart clones around long.

1. Post Game Interviews
OK, this one's a little nit-picky, but please save us the Bobby Cox post games comments about how everyone is playing well, hitting the ball well (but not getting hits), grinding it out or working hard. It's ok to criticize a player or just not love on everyone all the time. 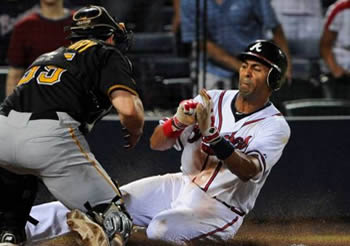 2. Juliwho?
Why is Julio Lugo in a Major League jersey? What does he bring to the table? I'm not sure, but I think we can find someone to play mediocre defense; I don't think many teammates are feeding off his glowing veteran leadership. This dude should be selling insurance somewhere.

*In conclusion, I think Freddi has done a fine job overall in his first year as Braves manager; looking forward to a few nice runs at another elusive ATL championship in the next 10 years.