Email ThisBlogThis!Share to TwitterShare to FacebookShare to Pinterest
First off, let me start by saying this is a very negative post, so save yourself the sorrow of my thoughts, the comments about how I'm a bad fan and just stop reading right now if you consider yourself a "believer" - this is your fair warning! I hate to say it, I wish it wasn't true, but the Hawks are the biggest joke in the NBA. They are the definition of a team that does just enough to build a little local buzz, but don't really attempt to do much to change the perception of the franchise. The Hawks annually are near the top the NBA in terms of wins and losses since 2008; the recipe? beat up on the little guys, lose the games against any real contender (especially on the road), do just enough to make the playoffs and then bail out and head to the house after that- no fire whatsoever. The Hawks don't deserve respect in the media, they don't average high attendance for a reason, and the front office marketing is focused around who the Hawks are playing to get folks in the seats. It's a very sad state of affairs when you aren't able to sell the home team despite being in the playoffs each year since 2008.

Around the league no one takes the Hawks seriously, why should they? look at their resume. Not only is their their playoff record ugly- but the effort is embarrassing. In 2008 after batting to force a game 7 with Boston- they scored 65 points in the final game, losing by 34. In 2010 after being swept in the 2nd round the previous year by the Cavs- the Hawks had a chance to redeem themselves, but instead opened round two in Orlando with a 43 point loss. Seriously? 43 points? In game 3 of the same series, they lost by 30 and went on to get swept again in the second round in consecutive seasons. How does this happen? Does Atlanta deserve this lack of desire? Losing is one thing, losing by 30+ in crucial games is another- changes should have been made and weren't. The entire organization from the ground up is built on financial principles, not putting a quality team on the court; they are built to make the playoffs, SportsCenter highlights and not much more.

When changes were made with the coaching staff, they patched a problem from within- with a cheap guy that was a part of the system that was the problem to begin with. When that had a chance to acquire a few smaller, quality team guys- they instead opted to resign Joe Johnson to a contract worth more than Lebron James & Dewayne Wade; crippling the franchise with an above-average fake star that they could put on billboards. Why? because he's the best they could get, no one else wanted to be here, and if they lost him- they lost the buzz, all that the front office cares about. Buzz > Production to the Atlanta Hawks. The roster is full of guys that just want to be paid; guys that are not overly concerned about winning. Championships have NEVER been a priority here. Save Al Horford (who came from a championship-minded program in Florida, and you can see that) Hinrich, Joe Johnson, Josh Smith and Marvin Willams all fall under this category. The failure has been strikingly repetitive, but no moves have or will be made in the near future; they have no plans on cleaning house. Charles Barkley said it best in the video here; the Hawks response- NADA. Call them out, they don't mind, this is sadly their identity... and that won't change anytime soon. 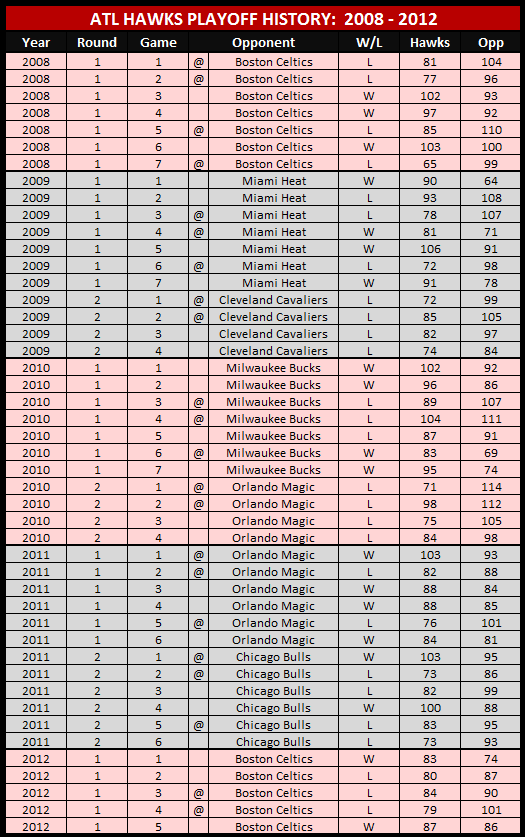