Email ThisBlogThis!Share to TwitterShare to FacebookShare to Pinterest
The Braves have had a quiet off-season thus far; management has made every indication that they aren't going to make a big "splash" move just for the sake of doing so. Wren & Co. have stated that they are comfortable with rookie shortstop Tyler Pastornicky (part of the Yunel Escobar trade) being the opening day starter, but all signs point to Atlanta signing a veteran (as always) SS to ease the transition, provide a 1 year bridge or fill a platoon with Pastornicky. Most recently, all the talk has been centered around Ronny Cedeño, who played for the Pirates in 2010. Agreeing to a deal with this guy won't make SportsCenter, but the market isn't strong right now at the position. The Braves won't (and SHOULDN'T) commit to a 2-3 year overpriced contract with Jimmy Rollins, the best available guy still out there, who's production has declined and is undoubtedly headed towards the twilight of his career.

Most of the rumors and talk has been centered around Martin Prado and Jair Jurrjens being on the block this off-season. I think the Braves are trying to sell high on both of these guys while they still have some value. Prado isn't the longterm answer in the outfield, and Jurrjens injury history has the front office falling out of love with both of these guys for the long term. The question constantly being asked is, "why would the Braves trade JJ after such a good year?" and the answer is pretty simple, he is a Scott Boras client that will soon be hitting the free agent market, his value is relatively high right now with the shortage of quality starting pitchers and the Braves are downright LOADED at the position. Right now Atlanta has 8 major league ready starters that would project into almost any rotation in the LEAGUE (Hudson, Jurrjens, Hanson, Beachy, Teheran, Delgado, Medlen, Minor). But hey, can you ever really have enough starting pitching? 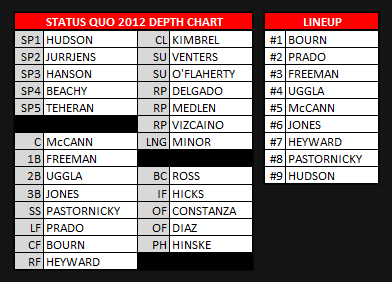 If the season started today, Atlanta would be satisfied with the roster as-is, but certainly the Braves have a few holes they would like to upgrade if the right opportunity came along. The wish list would include a veteran shortstop, utility infielder, quality bench bat and power corner outfielder. The biggest questions yet to be answered for 2012 are how will Jason Heyward rebound and contribute? Will a full season of Michael Bourn finally give the offense the spark it's lacked? Will the bullpen be as dominant as it was in 2010? Can Chipper stay healthy and play 120+ games? Those questions have yet to be answered; but regardless the future is bright with Atlanta's youth movement and foundation of the team being set for many years to come. Let's go get em' Braves!
Newer Post Older Post Home