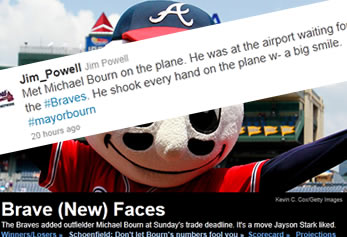 As you know, The Atlanta Braves made a solid trade right before the trade deadline, absolutely fleecing the Astros by acquiring one of the premier defensive center fielders in the game. Michael Bourn is having a career year and is one of the top speed threats in the MLB. The Braves sent over a few players that would be blocked anyway; and an average player in Jordan Schafer. ESPN and other media sources are calling this a steal for the Braves; and the Phils fans are going nuts. Phillies fans are the most defensive, insecure fans in baseball hands down. They are so worried about everything the Braves do and if any writer happens to say something good about them they fuss and pout and say... We are better, we are in first, we have double the payroll they do...boo hoo :/

I'm a die hard Braves fan, but hands down the Phillies are the best team in baseball... if Philly fans didn't have such a massive seniority complex- they might not feel so bad about saying the Braves are right there behind them. There fans all want to turn on espn and hear "Phillies are the best, everyone else sucks and no one else has a chance" Their parents obviously didn’t love them enough.

Seriously though, you can spin the Schafer thing however you want to Astros fans... I wanted Schafer to do well in Atlanta as much as anyone; but you could tell he wasn't going to be anything major. So many Braves players have came through the system just like him and you can spot them from a mile away; Blanco, B. Jones, Langerhans, Diaz, Kotsay, Cabrera, Ankiel, Francoeur, Anderson, Church... you could go forever. Just average at best outfielders who aren't coveted by any team. Atlanta had a solid outfield since C. Jones, A. Jones & Sheffield. I know a very good source with the Braves and he told me that the front office didn't consider Schafer to be an everyday player anymore and didn't see them making any long term commitment to him in CF; he has been a total bust since the HGH suspension. JS was once projected to hit 20HR/.300 AVG; hit .201 and was caught stealing 8 out of 17 tries in AAA, so he got sent to AA where he hit .175.

The gives the Braves a few things, finally some consistency in CF, the chance to sit McClouth and finally maybe a little rest/support for our already solid bullpen. Things are looking good for Wren & the Braves.
Newer Post Older Post Home