Email ThisBlogThis!Share to TwitterShare to FacebookShare to Pinterest
In the world of professional athletics today, image and marketability can give someone the overwhelming benefit of the doubt. These athletes generally cruise along and survive by being with a popular franchise (Reggie Bush, Dale Jr.), having great past accomplishments that don't match their current production (Derek Jeter, Brett Favre) or they are very good looking & attractive (Danica Patrick, Anna Kournikova).

Jeff Francoeur has a little bit of each of these attached to his career; he was a very hyped, legendary high school prospect at Parkview HS in Georgia, winning multiple state championships in both football and baseball. The Braves selected him in the first round in the 2002 draft, a franchise that has a very large fan base all over the country thanks to TBS. He got through the system fairly quickly and found nothing but success in his first year in the majors, making a Sports Illustrated cover headlined as 'The Natural.' Frenchy has since failed to make the necessary adjustments to match those numbers at any level, but the real seller for Francoeur is his million dollar smile, christian messages and support from female fans. It is still difficult to attend a game at Turner Field and not see his #7 shirt or jersey worm by dozens on Braves fans. 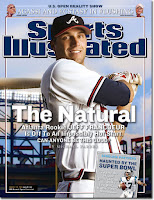 The reality is that Jeff is not much of a baseball player these days; in 2009 Atlanta's golden boy was basically given away to a division rival and in 2010 was traded to Texas to provide some bench depth and spark for the playoffs (IMO it was a marketing move, Texas needed to land a cheap 'goodlooking' player to keep interest and support high in the fan base.). Since Opening Day 2008-Francoeur has basically been an everyday player, playing in 451 games. His production since then has been a TOTAL of 40 homers in 1647 at bats, a batting average of .255 and a league worst OBP of around .300. He strikes out a lot and does not draw many walks making him a risk in clutch or late game situations.
In 2011 he was not offered a returning contract with Texas an opted to sign for less with the Royals as an everyday player instead on the Red Sox as a platoon type player. Francoeur hit .227 in spring training and still keeps his positive attitude insisting he is still an everyday player. If you can't make it in Kansas City, well, you can't make it anywhere, and I don't foresee Francoeur making any kind of breakouts again in 2011.
Newer Post Older Post Home